They say a week is a long time in politics, this of course has been shown beyond any doubt in the events that have unfolded recently in a country I used to call home. But what of a year?

I've been reflecting a lot over the last few days, I do that, but especially at this time of year as it's an easy time to remember.

Of course looking back both the painful and good memories come flooding in, once again I've been glad I live alone so nobody else has to witness the mess. But it suddenly occurred to me; just what was I doing in the less memorable years? So I looked, rather inevitably I took advantage of Google photos and it turns out I could track back at least to 2010 to see exactly where I was on this day.

As I looked at the photos I realised something, the me of that day had no idea what the hell was coming next... 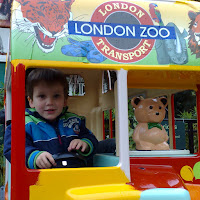 Ah yes. At this point in time I'd scurried off to London to work as ends needed to meet and food needed to be on the table, it was a difficult time. I do remember that I was walking on eggshells, carefully following the line that separated one argument from another. But at this point I had no clue, no idea that it would be but a few short months before being rather unceremoniously informed that my marriage had reached the end of the road. It was, quite simply a path that I couldn't see. And yet with hindsight it was so obvious. 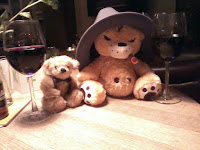 When Monty met Bizzle. Obviously I was only there as Monty's chaperone, I know Bizzle was a bad bear likely to lead him astray. By now the events outline above had not particularly neatly unfolded and I was in a strange place. And I don't mean Barnes, though that was, of course, where I was living at the time.

Looking back through the previous months there were huge gaps which rather reflected the darkness.

I know I had plans, though I know the unravelling that was going on made them all singularly difficult, which is probably why I didn't see that a year later... 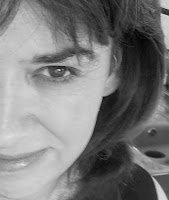 Rather unexpectedly I found myself sharing a flat with my best friend and Contrary Towers was born. We'd been there since March, which rather proves the point of not seeing what was coming next. And at the time I had no idea I would be there for the next 3+ years. Things were moving, changing, morphing. And more importantly in 2012 things were stabilising. After years, oh so many years, of being what others expected me to be, to do my duty, to conform, I became... Me. 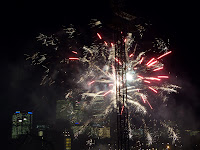 By All Hallows Eve 2013 I'd acquired a wand, given by the daft sod who would become my flatmate in 2016, but I didn't know that then. In fact, thinking about it, I was quite pissed off with him at the time, though not for the wand. I can't really think what it was all about. Not to worry.

Though looking at the picture now I'm wondering where the hell my boobs went.

What I do remember was I was home alone, missy was away somewhere or other and, as a result, she missed the fireworks that were either for an early Diwali or a very early Guy Fawkes. I didn't expect them. I was sitting on our balcony, a glass of wine in hand, when the first firework exploded. I put it down to kids. However, after about 20 minutes I decided that maybe it was actually organised...

I had no idea that the next year I would actually be in...

Eh? To be fair it was half-term and was really trying to make an effort, contrary to what I imagine my ex would have been said and, almost certainly, is still saying, even though things aren't exactly being made simple. So I behaved. And carved a pumpkin. It must be said, these are a lot easier to carve than the turnips I used to do when I was young.

As memories go this was a bit of a non-time. This is almost certainly a bad thing as I'm really good at blanking that kind of nonsense. I just wanted to go home. I wasn't looking forward to the next All Hallows Eve, but then I didn't know that the next one would be... 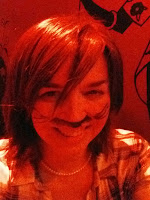 Well this beat being at home. I'd been working that day, things to finish, and afterwards I popped in to She for a cheeky cocktail before heading home, as you do. I can't remember exactly why I agreed to the whiskers and moustache, but it seemed like a really good idea at the time.

That night though, in context, felt like the end of an era, the last madness before a coming storm.

And I definitely didn't expect that the next year I would be in...

And then the storm hit. Or didn't.

Have you seem "The Crown" on Netflix? In series 1, episode 2, you see the young Elizabeth blissfully off on her Commonwealth Tour unaware that her father had died and her life had changed.

That was me, sort of. Mine had changed a few days earlier, on the 28th, when, unexpectedly, my partner died. Because he'd previously done disappearing acts I put not having replies down to that. I dutifully wrote messages, gave updates and said goodnight to somebody who didn't make it to the end of play on the Friday. And I had no idea. I took missy to the airport as she headed home, I packed, I faffed, I messaged, I boarded a plane and I flew to New York. It was another couple of days before I was tracked down and contacted.

Yet in the same light that I had no idea I would be there, I had no idea on this day in 2016 that all of the plans I'd made, we'd made, had evaporated. Gone. No more.

What makes it worse, in hindsight, is that the friend that I was with then, well, she is no longer talking to me. And I have no idea why, nor would I get a reply if I asked. The kids apparently call this "ghosting". I can't begin to tell you how much this hurts.

However, what I can tell you is that I sat on that plane heading to JFK I really had no idea a year later I would be in...

Well, Woodingdean, just outside Brighton. A lovely private hospital having some major corrective surgery to fix a long standing problem. Go me! That evening I feasted on not very much and jelly whilst being completely horizontal and not allowed to move. It has to be said, my costume looked before authentic and scary. 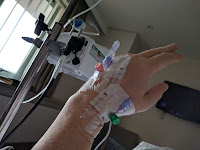 I didn't think much about what would come in 2018 as to be honest I was falling asleep every three minutes, not making much sense and being even more spaced out than normal.

There was no wine that evening. Mind you, a mixture of general anaesthetic and morphine is guaranteed to make you a party animal! Sort of.

I can say though that this was a good reason why I had no idea that the next year I would be in... 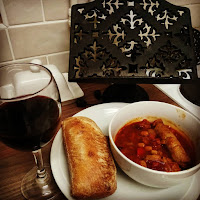 Eh? I really shouldn't have been quite so doped up the year before, maybe I would have been able to predict me becoming so exasperated with London life that I moved out to a stupidly remote place to live mostly alone in an old farmworkers cottage. Definitely not Limehouse Marina. Oh, just realised, in 2016 and 2017, whilst I lived by Limehouse Marina I was never there on the evening of the 31st.

Whilst it had been a tricky year, a really tricky year, I was happy enough with the situation. I know it wasn't to everybody's taste, but I had emotional wounds to heal and it worked for me. In fact it was working so much that I'd checked with the agent to ensure that I'd be able to renew for another year, plans had been formed.

So once again, I had no clue that with a swift change of circumstance, I would find myself on this All Hallows Eve on... 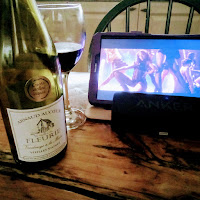 And yet; going back to my opening line, my feelings could have been very different this evening. Today was supposed to be the big day, according to the dogma driven politicians, that the UK would leave the EU. Unlike the politicians though, when I make an actual plan, I stick with it, I was determined to leave the UK before it left; of course the 29th of March came, went and the band played on.

Unlike the politicians I've learned that you can't predict the future, you can't state with certainty that something will happen. You can't stake your reputation on the unknown.