As of midnight tonight it's been 28 days since Sark went in to almost total lock-down.

Unlike in most places even the two food stores were closed with only home deliveries being permitted to make sure people could still eat. Which is nice. Trouble is that many of the islanders work on the island doing things that just were no longer allowed, whether this be on the land, in bars, restaurants, shops and even, of course, hotels.

I'll come back to hotels.

I make the place sound like a heaving metropolis, but it's really not. The point is that there are an awful lot of people on the island that suddenly couldn't work and, unlike in many places, there is next to nothing by way of support. Don't get me wrong, you should be aware of this when you live here, but it's still a stark and difficult situation here.

But it gets worse.

Sark has been both blessed and cursed. Blessed because, so far, there have been no positive cases of the Novel Coronavirus on the island. But similarly, cursed. Cursed because how on earth do you re-open the doors to a place that makes a great deal of its annual income from spring and summer tourism when by doing so you bring the risk of exposing the small population to something they've potentially not been exposed to before. It's true that some work has been permitted to restart, but even that comes with restrictions.

But what about me?

Well, in the first instance, I'm fortunate in that I work remotely and from home, so in many ways I'm unaffected. But the impact is no less apparent. I would be lying if I said I'm fine, I'm really not. In the same way that anyone in isolation isn't going to be fine. The escape is to go walking, for no more than two hours of course, however as that invariably means I'm walking with no conversation other than the thoughts in my head, even that is getting a little old.

I'm really bored of the thoughts in my head.

It's true that I'm quite capable of being relatively isolated for long periods, normally I'm happy in my own company. This is different. This has no apparent ending, no release, no plans to look forward to. As I said to my mother on Sunday, I'm taking it one day at a time, sticking with a strict regime of waking at dawn, starting work and not thinking of what the next day won't bring.

As things were beginning to grow difficult through February, I was quite aware that plans would fail to materialise. So I made alternate plans. For instance, back to the hotels, it was my Sark anniversary on the 20th of March, I toyed with various ideas but settled on booking a table pour une, pull on my glad rags, throw my heels in Imogen's basket and head off to Stocks Hotel for an evening of decadence and fine wines. Perfect.

And then Stocks, quite rightly, announced that they had taken the unilateral decision to close their doors until the end of May. Bugger. Okay, fine, pizza in the Bel Air it is then!

Or so I thought.

During the day of the 20th there was a Bailiwick wide order brought in to close all pubs etc. as of 18:30 that day. Okay, fine, I'll raid the freezer and drink cheap wine. It's almost the same.

The next big plan was of what to do about my birthday in May. The original vague plans to do something somewhere are almost certainly on ice. Stocks is out as they are closed to the end of May. The pubs? Well, no idea. So I suspect it will be me, Monty the Bear and a bottle of whatever plonk I can get, along with a burrito at that fine authentic Mexican place, Casa Contrary.

Hmm, it'll be a little like my 49th when I took myself off to Venice, alone (if you ignore said bear), because I was determined to do what *I* wanted to do for the first time ever.

Venice is definitely out.

Also on ice was the plan to put Marlene back on the road, do a mini-roadtrip visiting friends and family in the UK before importing her to Guernsey and finding a nice place for her to live ready for jaunts over to France and, hopefully, the next Contrary Roadtrip. Not going to happen.

And France is currently out too. As is the UK, and I'm not that keen on going there.

I'm a very shy individual. I tend to keep myself to myself and other than brief conversations in the pub, I will happily sit in the corner reading whilst sipping a glorious glass of cold Rocquette's fine cider. It's not helped by the fact that I spend the working week alone, and working, so don't really have anything interesting to talk about. Can you imagine how little I have to talk about now after more than four weeks of almost zero human contact. Which is making writing surprisingly difficult to do.

I've managed to find things with which to entertain myself, of course, I've spent time exploring the virtual worlds as I can't travel for real, this in itself has made a nice change from just making stuff for sale or by commission. There's been lots of Netflix and Prime, needless to say. Though, unlike most of Twitter, I've only managed to get through 6 bottles of wine over the last four weeks.

Unlike the film, 28 Days Later, there is no script to follow, no spoilers or alternate ending. My life currently feels like a Belgian Art House movie where little seems to happen and I'm not sure what the plot is, though the main character is seem to be getting a little more raggedy as time goes on.

So as the clocks in the house tick towards midnight and, without ceremony, mark the end of the first 28 days, I shall head to bed, and no doubt dream of journeys.

Journeys that, for now, I can no longer take. 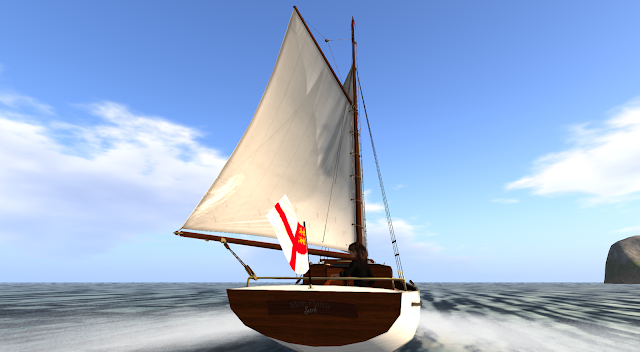