Places are so important to me. But it turns out people are too...

It's strange how I always start these ramblings with a geographical and temporal moment. I'm currently in a traditional British London pub, as far away as you can get from the Riva cafes, or seaside kiosks, or buses/ferry boats that have been the birth place of many a blogpost. Still, I continue the Croatian tradition of drinking a coffee in a bar, despite the fact that the British guys are drinking a beer. I'm not sure saying where I am is really important, but it acts like a type of mental pause or new 'life' paragraph. More a confirmation that I am still here and alive, and coping wth whatever is going on. In a satisfyingly circular way, this pub was where I celebrated the leaving of my old job back in February. Events of that evening came back to me as I was strolling up to the Brunswick Centre earlier, and I recall it continued my usual leaving-do tradition. This explains why I've only had around 5 long term jobs. I just can't take my gin.

Today has been a mending sort of day, where London and I have tried to set aside some differences. I've always known my year off was to give me and my favourite city 'some space', you know, to take a break from each other. But as any person knows, if someone says this in a relationship, it's utter bullshit. It's actually a cowardly way of ending it. To be fair at least a city isn't going to throw your stuff out of the window, or post nasty things about you on social media... So even though I've experienced tears of horror, and utter culture shock about being back in this great metropolis, there have been some watery smiles of remembrance.

I class the day I mentally 'moved' to London as the day on which I had my first successful job interview. In mid September 1995, I found myself in Moorgate, the heart of City of London, terrified and elated at the same time. And on the brink of the longest relationship of my life. It's been a love affair which has transcended many others, and for twenty years I've been proud to call myself a Londoner. Even when I was away this year, I often had a yearning for the variety and atmosphere which would regularly carry me home joyously when I was truly emotionally, mentally, and physically exhausted. But as I sensed at the time I started seriously preparing for this trip, there was clearly something coming to an end between us.

This feeling has developed into certainty over the travelling during the past week. First of all there was a brief trip to Split to round up the rest of my Croatia belongings, and then an unavoidable trip to London where I have dealt with some essential finance and health matters. In each place there was an important reconnection with some very dear friends. Seeing the contrary one in London, and the kaotic one in Split leaves me in no doubt that the personal spirit is far more valuable than the cold heart of the cities. And how I felt when I arrived was nothing short of horror at being back.

I was strangely disengaged when I was planning my time here. The change in how I am is immediately evident because as dutifully scrolled through my favourite 'what's on' sites, I found myself overwhelmed and suffering a certain level of anxiety. I stopped looking because ultimately I just don't care. I've already had a quiet meltdown in the peaceful surroundings of the Limehouse flat because of the sheer mental strength required just to face the outside world - there had also been a minor incident at a train station which had shaken me, and given me the first taste of adrenaline in many months.

This was a shock. It served to remind me that I had been living on this drug for years, and related panic attacks were a regular part of life. These not normal, and neither should they be. As I've gone through the week and had the time to assimilate and observe the physical and mental changes, I'm succeeding in keeping my heart rate down, and ensuring my newly found calm-centre is generally anxiety knot-free. The peace has come at some cost, but I think ultimately it has been an incredible thing to capture, and I'll be damned if I lose it again. To continue the place-as-partner analogy, I'm happy to snuggle up quietly on the sofa with Šipan.


Posted by Clareangela at 14:06 No comments: 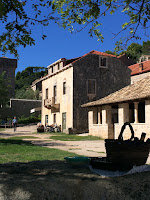 I've not blogged since returning from my jaunt, which suggests that I haven't been doing anything. This being precisely the view of my landlord, he allowed me to catch up with the usual post-trip shopping, washing and housekeeping, and then he asked, 'Klara, želiš posao?' Rather cunningly, he then said it was so menial that I wouldn't be interested. Making like one of the mussels here, he closed up and ambled off, not telling me what it was. Infuriating man. If you want to guarantee my interest, it is this is the only way to do it.

Don't you hate it when people read you like a particularly easy book?

Eventually, after much more wine and cake-based bribery, he admitted that it was something we had discussed some weeks ago but hadn't followed up. Throughout the summer, a couple of people in the village had been selling oil, liqueurs and other local delicacies to all our island visitors. These regular faces by the harbour have now disappeared, partly because they have run out of produce and it is pretty much the end of the season.

Apparently this house isn't even close to running out, despite my best efforts at drinking it all. There are a couple of thousand litres of the highest grade 2015 vintage olive oil in the storeroom downstairs, and we were now looking at a particularly sunny end of September. They had thought about selling bottles of this glorious stuff on the harbour/town square a few months ago, and even asked a few people if they could do it on their behalf. They are so busy here with other aspects of business that taking five hours out of the middle of the day is impossible. Anyway, as a last resort and being the only mug available, they asked me...

So the next warm and sunny morning, there was a mad dash to get things sorted before the various ferries and boats arrived. We stuck labels on glass bottles, they were filled and sealed, and then popped in a basket. I took my wares to my finely crafted market stall. Oh, you mean the rough hewn cube of limestone in the square? You know, the one near the Tomislav monument. Perfect. I nervously set out my bottles, complete with bread, a tasting dish, and waited for customers. 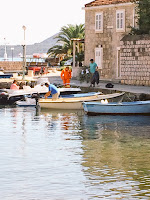 Oh well. I was soon joined by Marija and we settled in for a cosy few hours in this idyllic spot. We
chatted, caught up with the village gossip, quipped with local passers by. Work was going on around us; boats being painted, apartments being emptied, nets being mended. The activity here can be subtle but it is there if you take time to look. For instance, a boat today brought someone who was taking away branches of olive trees to be tested - what do they need, how can they be improved? Everything here has a purpose, everything has a rhythm, and it works like clockwork.

Speaking of which, you can set your watch by visitors who arrived on boats, old and new. After a real mixed summer, unusually they were mostly English this week - with a few French, some Poles - and happy to soak up some sunshine. Most people were too terrified to make any form of eye contact with our hard-nosed sales techniques. Some deliberately went the long way round the square to avoid my basket of oil. With a friendly good afternoon, a smile and nod, clearly we were moving in for the kill each time, Moroccan-bazaar style. I didn't think I was that scary.

However, thankfully some people were interested in learning more, and happy to spend a few moments chatting about life on this island. My sales technique is purely information based; you can take the girl out of the library but...! Even as people stood looking at the monument or church, I wanted them to enquire. But as one of the local ladies sadly told me today, she is regularly asked, 'where am I?'. People get off the boats and have no clue what the island is called. So I'm simply valuing the several conversations I had with people who cared enough to natter.

So forgive me if I get mildly tetchy with people who come here for 45 mins and write articles based primarily on wiki research and €€€. You see, the olive oil is a symbol of this place - you need peace, love and time. The effort it takes to get from terrace to plate is incredible; weather, olive flies, harvest, pressing, all of this takes time. The money made by selling is actually the least important because the end product is the way of life. Money is obviously vital but it's not the focus.

Anyway sales is another avenue that I clearly won't be pursuing in future! About 10 bottles this week, no one's retiring yet.

In return for selling copious quantities of olive oil this week, payment has been made in the shape of fresh fish. If you work for fishermen, I suppose this reward was inevitable, but it was very welcome. They were waiting for me in the big fish fridge; four huge beautiful shiny mackerel. Before I cleaned and filleted them I admired their colours and brightness. Inspiration was needed as I wanted do something slightly different than the usual tasty oil, garlic, and hot grill combination.

The previous day I'd been out with Marija and her family. She had promised to take me to the fields to get what she described as 'grass' and I was puzzled. I was handed a knife and shown the plant that we were going to collect. Turns out that it was dandelion! We picked a bagful, and I was then handed the lot, as well as some wild rocket for a salad. She told me how to cook it and off I went with leaves that that my granddad used to curse. She said to clean and sort it, then wilt like spinach. I added garlic, oil, wine vinegar, salt and pepper and allowed to sit and cook for a little longer. I wondered how to use this rather acquired taste veg...

Delia had an idea which combined mackerel and pesto mash. I don't think that putting potato into fish and baking would work for me - far too much effort and perhaps a little bland. So I made a few changes using the basic idea. 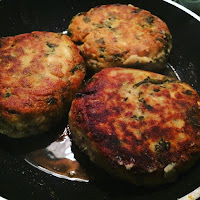 Given that I'm going home in a week, and I enjoyed the previous day's cakes, I thought I'd try a curry flavour as I'm serious need.

Melting a butter/oil combo, I fried up a small onion, curry powder, cumin, chilli, some finely chopped red pepper, and popped in the final two raw mackerel fillets and sizzle thoroughly. Once it's all cooked and soft, I flaked the mackerel into the new batch of mash and scraped in everything from the pan. Add an egg and a little flour to bind, I chopped up more dandelion and stirred it all together. Cook as above, and add more tabasco for fun.

Serve both versions with a good dollop of hot ajvar.
Posted by Clareangela at 19:23 No comments: